Dear readers and friends our website will be undergoing some re-construction work in the coming days. So we might be offline and there will be no new posts until work is completed. You shall be informed as soon as we go live again......we will miss u all but we shall be back as soon as possible....so watch this space. Wish u all a lovely week. Stay cool as usual. We will be back soon :-))

It seems like summer is finally crawling on us...woo-hoo!!! :-)) Lately, the weather has been fantastic my side of the world. It feels so so good to finally feel the sun on my skin once again :-)) I am enjoying every minute of this sunny weather while it lasts :-))
Last thursday was father´s day and a holiday and the weather was just perfect...not too hot nor too cold.  I got to spend a fun day at a Family Amusement Park called Lochmühle.


The Freizeitpark Lochmühle is a popular amusement park located in the Taunus mountains of the Hesse state and it’s the site of a former corn mill.
Staying true to its humble beginnings, the park prides itself on a less commercialized, more natural amusement park experience. The park opened 35 years ago, offering pony rides, petting zoos, nature trails and picnic areas.

The hallmark of Freizeitpark Lochmühle is its pony rides. The park’s mascot is the cartoon pony “Polo” (Pony plus Lochmühle) and there are over fifteen ponies available for riding. Some can even be rented for a period of time to carry you around the park.

This scenic train rides gives you great views from above while you learn fun facts about the park.

Not many amusement parks can boast of UNESCO World Heritage Site status but Freizeitpark can make a claim. The Roman Trail takes you past an ancient Roman fortress, Fort Saalburg and UNESCO site the Limes. Here you can learn more about the life of the ancient Romans in old Germania.

Freizeitpark Lochmühle revels in its natural environment and its rides are decidedly more low-tech. There’s a roller coaster of course, but also a giant trampoline, pedal cars, real water rafting and mini-golf.
And for the summer heat, there’s the motor boats, water bobsled and a large water slide. Kids will enjoy the petting zoos, aviaries and other animal showcases. 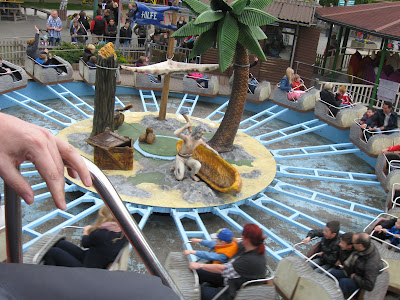 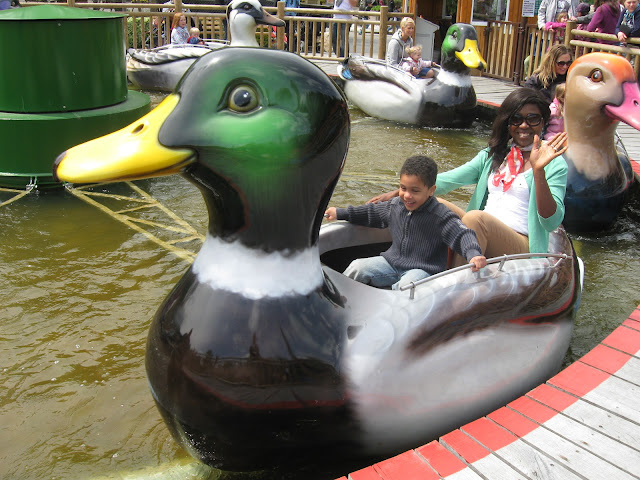 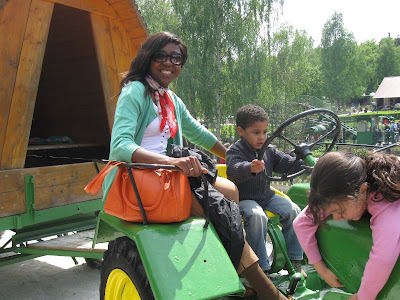 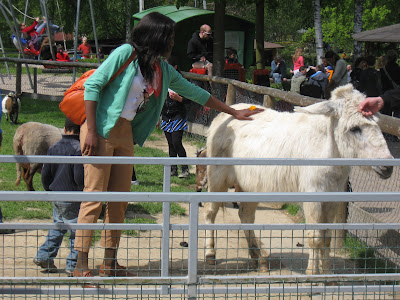 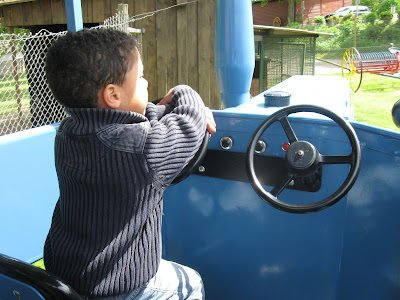 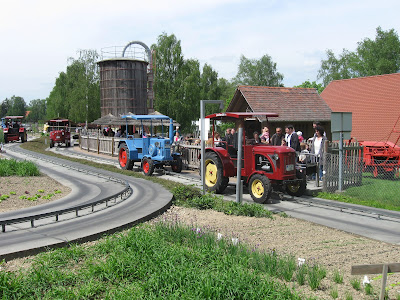 Freizeitpark offers many different dining options. If you’re feeling frugal and want to bring your own food, there are pavilions and picnic tables available. You can even grill your own meat, using one of the many free-of-charge grilling huts.
But there are also restaurant options, like the Polo Grill and Cafe Lochmühle (both are only open in the high season however!) And of course, there are many snack kiosks and a Pretzel Bakery for a quick meal stop. 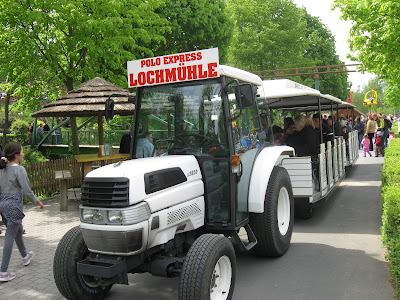 It was a fun day for us all and i must say for a family with kids, this park is a hit!! I hope you did enjoy exploring the park with me. Stay cool as usual until we meet again with more summer adventures :-)) Wish you all a fun-filled week.


from "Deutschland" with luv,
Nakutana
Posted by Afro meets Euro at 6:40 AM No comments:

A friend & old classmate of mine (also called Lucy) and I decided to meet up and have some girl time two weeks ago. While we were sure we wanted to meet and have fun, we weren’t so sure in which city we could meet up since we live hundreds of kilometers away from each other. I live in Germany and she lives in Austria. We later decided on Nuremberg in the southwest of Germany. It was the ideal city for us as we needed something central, each one of us had to travel approximately 3hrs by train to get there.


A Metropolis with a High Quality of Life

Nuremberg (Nürnberg in german) is a beautiful, old city with a vibrant history. The medieval fortifications of the striking old town, Gothic churches, colorful market places and hilltop castle of the old imperial city are as awe-inspiring today as ever.

Nuremberg boasts a unique mixture of tradition and modern times. Both people born here and people who moved here appreciate its extraordinary quality of life. At the same time, Nuremberg is a modern city with 500,000 inhabitants, and the centre of a prospering European metropolitan region with 2.5 million inhabitants. Its almost thousand years of history are still obvious in its cityscape.


Nuremberg is the second-largest Bavarian city, and fourteenth largest municipality in Germany. Particularly after the EU eastern enlargement, the city has profited from its central location within the European economic region. Nuremberg is the economic, services and cultural centre of Northern Bavaria, and the centre of the Nuremberg Metropolitan Region with about 3.5 million inhabitants.

The percentage of foreign nationals of over 18 per cent living in this open-minded metropolis, is well above the average for Bavaria and the Federal Republic. Nuremberg citizens from all nationalities live together in an atmosphere characterised by tolerance and calm co-existence. Nuremberg is one of Europe's fastest growing trade fair locations. Every year, over 1,2 million people visit about 100 events and about 50 specialist trade fairs and congresses, including the world's largest specialist trade fair for toys.. (source: www.nuernberg.de) 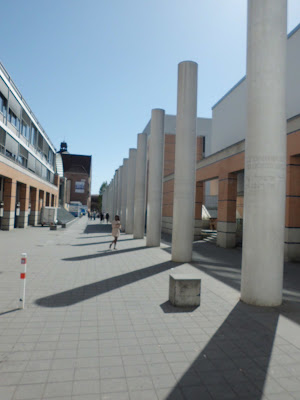 Human Rights street right outside the museum with 30 pillars in 30 different languages as a reminder of the 2nd World war atrocities. 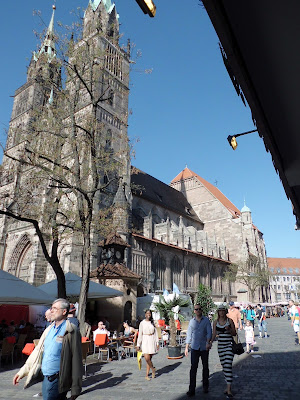 The "Marriage Carousel" (Ehekarussell) was erected in 1984, immediately in front of the White Tower. The work, created by Jürgen Weber, refers to the poem "Bitter-sweet Married Life" by Hans Sachs, who in drastic words described marriage from the first stages of ardent love via exhausting struggles, and right through to the death bed. The fountain's sculptures reflect this text in all its beauty and horror, while Hans Sachs is depicted dancing above a goat and a virginal beauty. When the fountain was put up in 1984, its drastic expression and the high overall costs triggered a stormy controversy in the City Council, in the media and in the population. 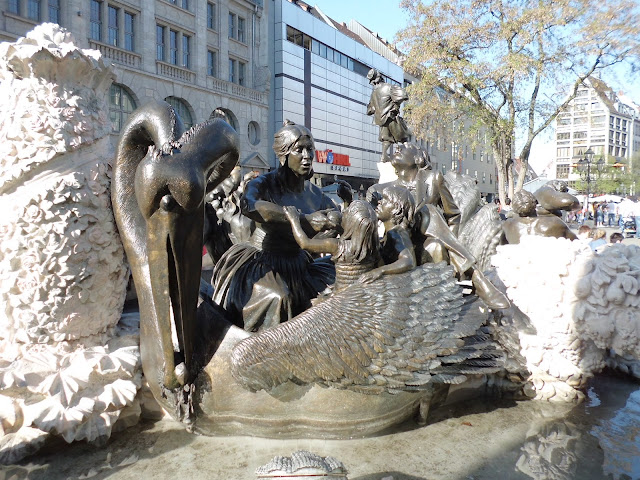 marriage from the first stages of ardent love via exhausting struggles, and right through to the death bed.

Right in the core of the old town is the St. Lorenz church, a medieval church of the former free imperial city of Nuremberg. It was badly damaged during the 2nd world war and later rebuilt. It is also one of the most prominent churches of the Evangelical Lutheran church in Bavaria. It is a step back in time with its beautiful art and statues. Entrance is free if you want to take a peek inside :-)

What’s a girly trip without shopping & a good meal? 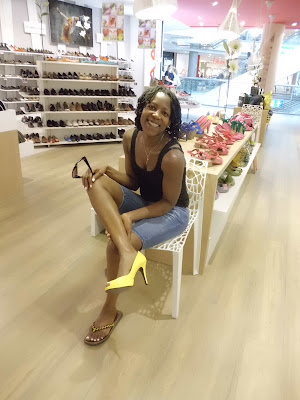 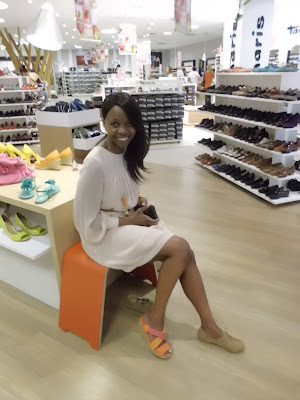 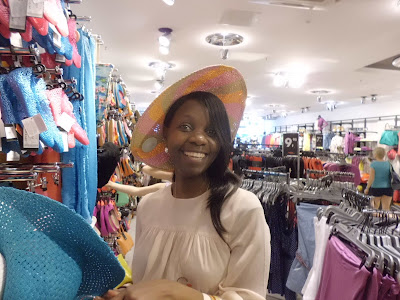 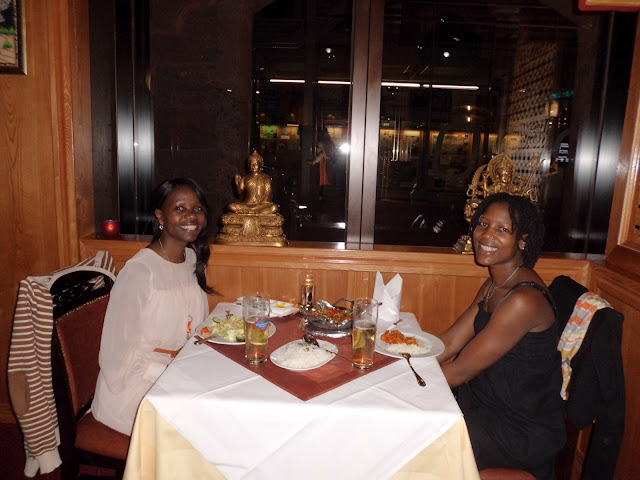 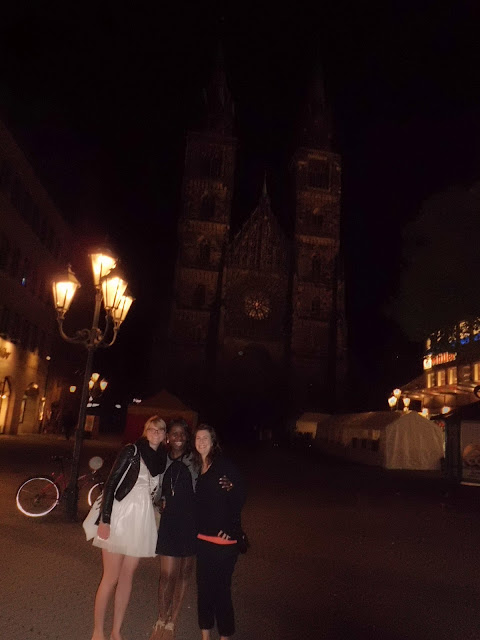 These two lovely ladies, were so helpful in identifying the “in” night spots : ))

With so little time and a lot of sightseeing to do, we weren’t able to see all the attractions that we’d set out to visit. Three of the attractions I wanted to visit but never got the time to are, Handwerkerhof (Crafts Yard), Henkersteg (hangman’s bridge) & the Nüremberg castle.
I really loved my short visit in this beautiful City with a grand history, it’s definitely a city worth visiting.

Hope you did have fun with us. Stay cool until we meet again :-)

from "Deutschland" with luv,
Nakutana

Posted by Afro meets Euro at 11:03 AM No comments:

Summer is just around the corner and lately i have been a little obsessed with finding the perfect accessories. This summer i am very much attracted to african inspired designs. I like, love african inspired fashion and accessories....they are bold, loud and vibrant and they are a true representation of "who i am" and "where i come from" and if i could i would wear them all year round :-))
Unfortunately, most of my african  outfits can be worn only on special occasions. African fashion is generally very bold, vibrant and very colourful. This might not always be suitable for daily wear.  For me, the key to wearing african fashion and incorporating this in our daily lives(especially for those living abroad) is finding a perfect blend between the African and Western style....what i like to call the "Afro meets Euro" style :-))
This summer i plan on re-stocking my wardrobe with african accesories and outfits more suitable for daily wear :-))
Recently on this topic, Lucy and i have also been chit chatting with our ladies in the "Meet & Chat Corner" and some of them do have lovely collections of afro accessories and would also love to incorporate more african inspired outfits into their summer collection(more about our ladies afro collection in another post).
So today, i would love to share with you one of my inspiration source this summer  for african inspired accessories.  So all you accessories junkies get ready for your fix :-))  This fashion house goes by the name Bangili Jangili ...(Accessories Junkie)


So if you are looking into introducing accessories into your looks, and you love it vibrant, colourful and afro-euro like myself, then start with these amazing pieces.... let the summer begin!!!!  Be inspired. Enjoy and stay cool until we meet again…xx

Far from home in Africa and into the land down under, you will find a little jewel labeled Bangili Jangili. A fresh fashion pearl that brings two emerging self-taught Kenyan designers - Winnie Wesaala and Naomi Kiarie to the community. Based in Sydney, Bangili Jangili are walking an exciting and colorful line of contemporary African accessories, bringing together rich elegance, fun patterns, super bright colors and an ingenious use of African fabric and other exciting materials to create an exotic charm with elegant ease.

BJ's key pieces include bags, belts and clothing items. Majority of these are artistically designed and handcrafted in Australia using traditional African fabrics fused with and other exciting materials such as quality genuine leather and canvas to create a contemporary look but still preserve a piece of African textile history. The materials and colors used often inform the design and also reflect the philosophy behind the collection name. BJ's pieces are crafted in limited edition for super exclusivity. 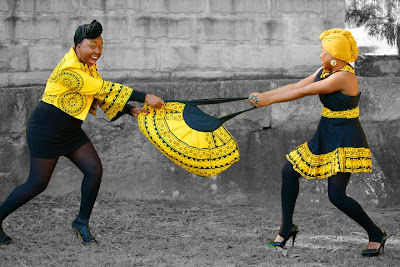 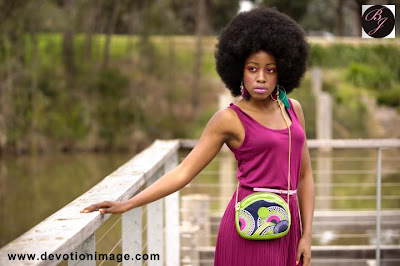 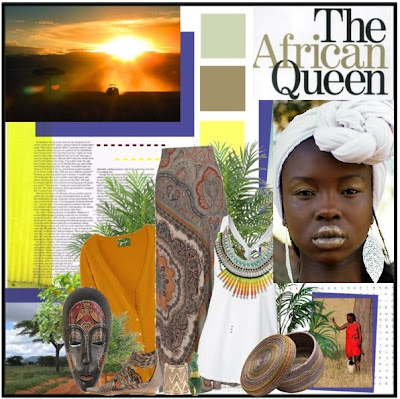 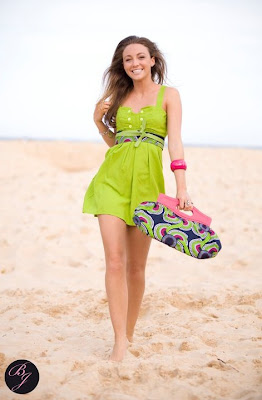 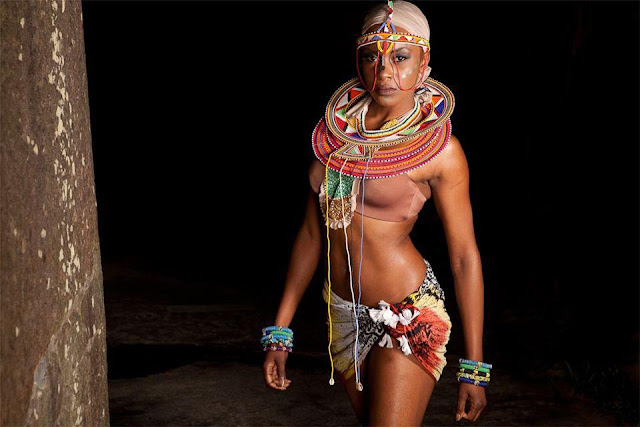 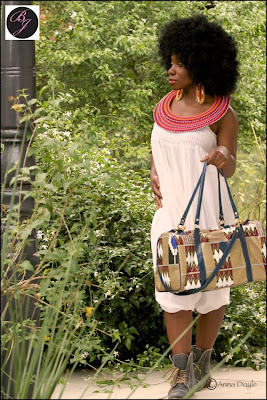 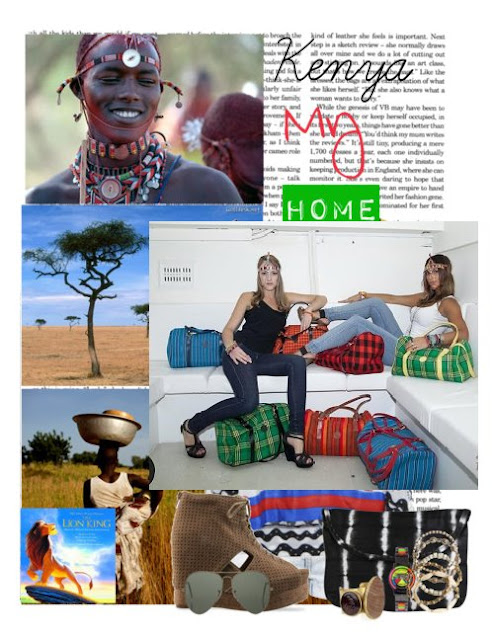 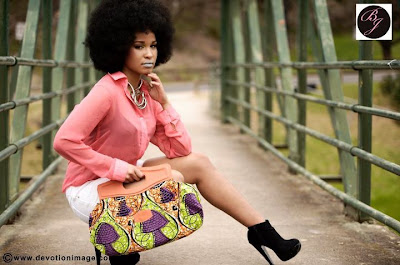 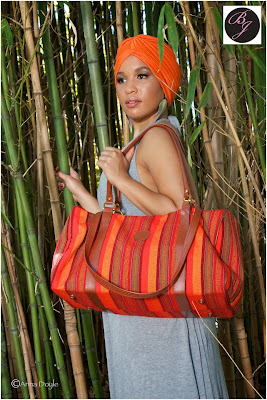 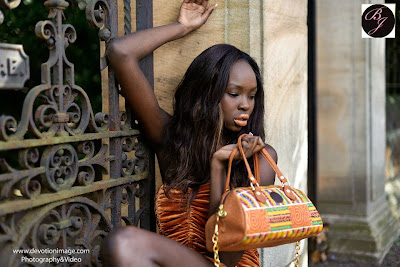 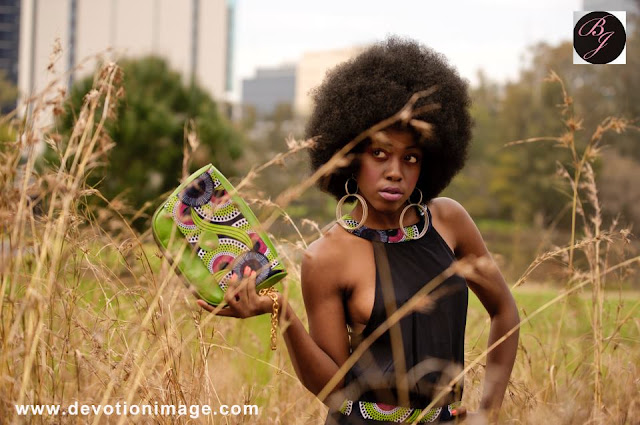 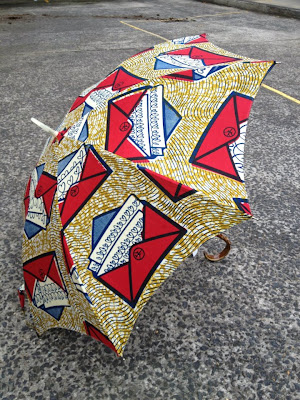 from "Deutschland" with luv,

Nakutana
Posted by Afro meets Euro at 6:51 AM No comments: 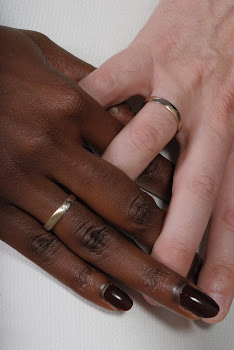